Wind: Listen to the residents

Last week I went to the Fulton County Commissioners meeting at Fulton.

It was standing room only. The meeting was very civil and well ordered. What I found interesting was that a large share of those in attendance were my friends and neighbors and most, not all, are against the wind turbines.

Of those in favor, most were from the construction side. They wanted jobs. I understand that, but this is a project that will affect lives for at least the next 30 years. The lives it will affect the most are the residents who live within the wind field. I got there at 5 p.m. when the doors were to open and the parking lot was almost full. When going in we were greeted and asked if we wanted to speak on the issue and if we were for, undecided or opposed. I signed the opposed for an opportunity to speak. I was about the 10th or 12th on the list. At that time, no one had their names of either the for or undecided to speak.

I did not get the opportunity to speak.

The first five speakers for the evening shared current rules, taxes, legal aspects and the developer, RES, which all slanted their speeches in favor of the turbines, especially RES. The only opinion that slipped out was when speaking on the decommissioning of the turbines, Richard Hall let it slip about getting rid of the “eyesores.”

This brought a large applause. The only scheduled speaker in opposition was Aaron Ault for the Fulton County Property Rights Group. He brought out points that RES and others in favor didn’t want shared. He shared so much about health issues, environmental issues, drainage and irrigation issues, and many others.

To hear his talk, visit the Fulton County IN Property Rights Facebook page. I encourage everyone to listen and watch his presentation.

I spoke with RES before the meeting. I shared that I live in the area of the county that has had to put up with NIPSCO for almost 60 years. I have had to farm around them and allow them full rights to our ground. They own us. I ask RES about that and their response was, “Oh, we aren’t NIPSCO”.

We would never do that.

I asked him about what it says in their contract. He denied it.

So here it is on page 10, 3.2.4: “Notwithstanding the grant of the easement contained in Section 3.4 below, Landowner understands and has been informed by the Company that by this Agreement, Company has the right to cause on, over, across and under the Property or as an indirect or direct result of Company’s or any successor or assign’s activities on the Property in Connection with the Windpower Facilities or the Effects.

Except as otherwise agreed to herein, Landowner, for itself, its heirs, administrators, executors, successors and assigns, does hereby waive, remise and release any right, claim or cause of action which it may now have or which it may have in the future against the Company or successor or assign as a direct or indirect result of said Effects.”

They will own us!

Then to top it off, after construction is done, RES plans to sell the wind field and we will then have to deal with another company who also has no interest in us, except for the tax credits that they will be receiving to line their pockets.

I am sorry people, but there is more to life than money.

Yes, we need money to live, but to what extent?

Do we let it affect our quality of life? Will we let it pit neighbor against neighbor for many years to come? Will we allow it control our livelihood?

Will we sell out to a company whose only interest in us is the tax credits they will receive?

If wind turbines are so awesome, why don’t they replace the aged ones and rebuild in those areas? Because the tax credits are for new construction, not for replacing the “eye sores” of the past and they are in high wind areas.

So my appeal is to the commissioners and the plan commission, please make the setbacks safer at 2640 feet or four times the height, whichever is greater, as compared to the 900 feet and to those who haven’t signed with RES, please DON’T SIGN THE LEASE AGREEMENT.

Help us to preserve Fulton County as an agriculture county, not an industrial wind farm.

The next Commissioners meeting on this issue is Nov. 20, 2017 with the location yet to be determined.

Editor’s note: The location of the meeting is at the Fulton County Fairgrounds Community Building.

The commissioners have been tirelessly researching and listening to advice and comments from wind developers, concerned citizens and other counties with Industrial Wind Turbine projects. This decision is one that could change the landscape and the culture of our county FOREVER.

While I have only lived in Fulton County for 15 years, my husband’s family has been here for over a century. His parents had four children that have been around the world and back, choosing to build homes on their family’s land and raise their children here as well. This rural farming community is rich in family and farming traditions that have created a peaceful, community minded and strongly intertwined culture. I grew up outside of Chicago, but now reside in a town of roughly 350 individuals. I know more names and families in Fulton County than I ever did in my large hometown.

I say this because the setbacks proposed for approval on Nov.

20th could potentially destroy the culture and lifestyle that so many have enjoyed here for decades.

What have been proposed by our planning board are some of the shortest setbacks in all of Indiana, for some of the tallest turbines in the world. These 600 foot, giant spinning skyscrapers could be placed only 1,200 feet from your home, and 900 feet from your property line.

My husband and I share the dream that one day our children will return home to Fulton County and build homes on our land to continue our family’s century long tradition. These setbacks would rob us of that dream. We would not be able to give land to our children, as building a home closer to the turbines would be unsafe.

There are countless other families in this same situation.

Our commissioners have to consider the rights of every citizen in this county, not just those of individuals that have signed contracts with RES, the wind developer that is proposing to build 133 turbines in Fulton County alone.

If others feel comfortable enough to live closely to a turbine, that is their right. But those citizens, the wind developers, and our elected officials CANNOT ethically force the rest of us to do so.

Consider these facts: RES often uses a model of turbine manufactured by VESTAS, a Dutch company. VESTAS’ safety manual states that the turbine workers should not linger within 1,640 feet of the turbine should something go wrong. There are over 2,000 incidents on record of accidents, many involving injuries or even fatalities. Yet our planning board has proposed to allow RES to place our HOMES and FAMILIES within only 1,200 feet of a turbine?

What if one of these turbines were to catch fire?

Our fire departments are not equipped to fight fires hundreds of feet in the air. The Netherlands, VESTAS home, recommends setbacks equivalent to 4 times the height of a turbine and strict sound limits.

Denmark, one of the strongest wind power nations in the world, has been using Industrial Wind Turbines as a source of clean energy since the 70s. Obviously, this has allowed them many more years to track health and safety issues involving turbines.

After years of practice, their government recommends setbacks of AT LEAST 4 times the height of the turbine for the entire nation. In addition, anyone living within six times the height of a proposed turbine may have their home’s value assessed for loss of value due to the turbine’s proximity, and wind developers are responsible for repaying homeowners anything more than a 1% loss of value. Germany, another experienced wind power nation, has setbacks of 3,280 feet and is currently moving away from wind energy, because their citizens cannot afford to pay their electric bills. (Wind energy is apparently not so affordable). Germans also require sound levels to be at or below 30 decibels in a bedroom near a turbine, yet RES is proposing that 55 decibels is acceptable. France requires a 25 decibel limit within homes.

If our officials are looking at ALL of the research, and not just the research presented to them by wind developers, it will be clear to them that these proposed setbacks are a danger to our community.

Sure, the citizens of Rochester will not be affected, other than the average $25 property tax cut they may see.

But I think it’s safe to say that the good people of Rochester are not willing to accept $25 in exchange for putting their rural neighbors’ lives and homes at risk.

The only argument posed in favor of this project is the financial aspect. While this project may offer a sizable paycheck to our county (with restrictions as to how the money can be used), there are other ways to bring money that will not change the entire landscape and culture of our community. It is an elected official’s responsibility to seek out new industry and opportunities that will benefit our county.

The right opportunity is out there, and it is one that will not put our citizens’ safety, health and personal welfare at risk.

We, the citizens of Fulton County are placing our trust and hope in our elected officials.

They swore an oath to protect the safety, health and welfare of ALL citizens of Fulton County. I pray that they hear our message loud and clear, or we will send another message in the next election.

Fellow citizens, be sure to attend the Public Hearing at the Fulton County Fairgrounds on Monday, November 20th at 6pm to make your voices heard. 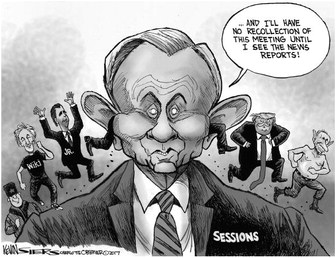 PEOPLE’S CHOICE This editorial cartoon was selected by visitors to The Sentinel office Thursday. Sentinel readers are welcome to visit our offices, 118 E. Eighth St., Monday to participate in the next editorial cartoon people’s choice. The winners will appear in Tuesday’s edition.

Click here to see this page in the eEdition: